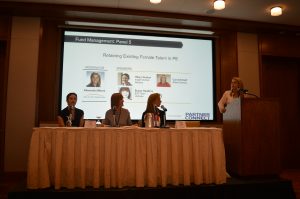 LPs and GPs are more conscious of hiring, retaining and promoting women, but it’s still a toxic environment for females in private equity.

That was one of the takeaways from a panel discussion during the Emerging Manager Connect East 2017 conference at the Harvard Club in Manhattan on July 26. The conference was put on by Buyouts and VCJ publisher Buyouts Insider.

A lot of women in PE don’t see clear career paths for themselves or any chance to move up to senior roles. “But some firms are starting to intentionally put a line in the sand, saying they are no longer hiring externally but promoting within,” noted Carol Schleif, deputy chief investment officer at the wealth-management firm Abbot Downing. Schleif was speaking on a panel called “Retaining Existing Female Talent in PE.”

Similarly, panelist Susan Hawkins, a partner at BSG Team Ventures, noted a shift on the portfolio side, with more executive hires of women, especially in consumer-oriented businesses and particularly with CFOs.

Schleif said that although more women in PE may be considered for promotion from within, women still face a tough go once they move up, since in senior roles they are expected to act more like their male counterparts.

“If you don’t know who won the football game on Sunday, you can’t be part of the collegial discussion in the office on Monday,” said panelist Hilary Gosher, managing director of Insight Venture Partners.

There are way too many sports analogies in the workplace, added Schleif, who said she tells people that for every sports analogy she hears, she’s going to “say a labor-and-delivery analogy. And that gets the point across.”

The discussion about women in the broad investment community ramped up in recent weeks as five men stepped down, been asked to resign or been accused of misconduct, as revelations of sexual harassment swirl through the venture community.

“Change in the industry is trending in the right direction, and I’m hearing more firms talk about hiring women as a groundswell of support rises in the wake of recent events,” Gosher said. “But if you look at the situation at Uber or the VCs in Silicon Valley, it’s still a toxic environment for women.”

The panel on retaining women in PE, moderated by Alexandra Mores, co-founder and managing partner of Atlantix Partners, said the industry needs to change how women are judged. Often, they said, women investors are judged by the number of deals they do, rather than their performances. “We need to change that yardstick and not just judge on the number of deals,” Gosher said.

Hawkins added that the social construct of judging women in business needs to change, too, so more women gain the opportunity to become rainmakers, the people who bring in new business based on their reputation.

“This [women in business] is a hot topic,” Mores said. “There’s a lot more to talk about than what we can put into a 30-minute panel discussion.”

The panelists for “Retaining Existing Female Talent in PE” at Buyouts Insider’s Emerging Manager Connect East 2017 conference at the Harvard Club in Manhattan on July 26. Photo by Buyouts Staff.