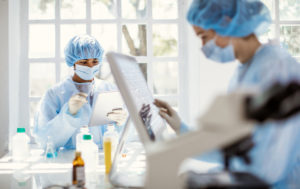 After Thermo Fisher forked out several billions of dollars for PPD, Pamplona Capital Management is looking to exit its investment in Parexel, another large contract research organization helping expedite the development of new drugs, according to people familiar with the firm’s plans.

Evercore was recently appointed by the sellers to evaluate a potential initial public offering, some of the sources said. At the same time, an outright sale is also being considered as the company has drawn interest from large buyout funds, sources said. Management meetings have taken place pitching the business, although no bids have been received, some of the people said.

Bloomberg reported on Monday that Parexel, with about $450 million in annual EBITDA, could obtain a value of about $9 billion in a potential transaction.

The process, in its early stages, comes on the heels of Thermo Fisher’s nearly $21 billion deal for PPD, which valued the high-performing CRO at more than 20x its EBITDA guidance for 2021. PRA Health Sciences, another CRO, also commanded around 20x in its February sale to ICON at a $12 billion value.

The pending sale of PPD is poised to produce significant returns for Hellman & Friedman and Carlyle Group, PE Hub wrote Monday, with its decade-long investors poised to generate 5.5x and 3x-plus multiples of investment.

For Pamplona, the process comes less than four years after completing its take-private of Parexel, which at a $5 billion enterprise value was one of 2017’s largest sponsor-led deals in healthcare.

Pamplona’s healthcare-focused executives subsequently departed from the firm in 2018, PE Hub previously wrote, and notably, the firm has not made a new investment in healthcare since that time. In other healthcare portfolio exits, Pamplona-backed nThrive sold its software business to Clearlake Capital in a more than $1 billion deal in November, PE Hub wrote.

Underscored by recent high watermark valuations, the process comes as investor appetite for outsourced clinical research services remains robust. Amid the covid environment, the push to make the drug development process more cost-effective and efficient has only accelerated.

That said, Parexel isn’t the only potential opportunity in the sector.

Pressured by activist investor Jana Partners, LabCorp in March engaged Goldman Sachs to advise on a strategic review of the business. One action plan to unlock value, as widely reported, could be the potential spin-off or sale of Covance, its CRO division considered highly undervalued.