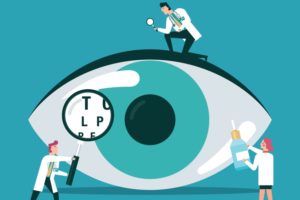 Large financial buyers are looking at the potential opportunity to carve-out Bausch + Lomb – whose activist-pressured parent company announced last year it planned to spin off the iconic eye-health business, four sources with knowledge of the process told PE Hub.

Morgan Stanley and Goldman Sachs were engaged for financial advice at that time – the same banks that are also advising on this sale process, the people said. Indications-of-interest for the business are due around early April, some of the sources said.

An outright sale versus a spin would present an opportunity to generate a lot more cash needed to de-lever, sources said, since Bausch, as of year-end, was sitting on more than $24 billion of total debt.

Three sources placed Bausch + Lomb’s EBITDA at close to $1 billion. Its segment profit was reported north of $1.1 billion for 2020 on $4.4 billion of revenue – 55 percent of the company’s revenue for the year. Both revenue and segment declined year-over-year, which the company attributed to covid-19 impact.

The M&A math is tricky in the case of a sale, sources said, suggesting multiples in the double-digit or mid-teens EBITDA range could be possible – exceeding the high-single-digit level at which shares of Bausch Health have been trading. At 15x, that would imply a roughly $15 billion valuation.

The company then known as Valeant completed its acquisition of Bausch + Lomb in August 2013 for $8.7 billion, according to the Wall Street Journal.

Some of the sources said PE firms are considering buying the business and then turning around and reviewing the portfolio – with the mindset that whoever buys it could unload a piece of the business to a strategic buyer that is not participating in the current process. A strategic might only be interested in Bausch + Lomb’s consumer business, for example, on person said.

Given its size, an LP co-investment is also a likely scenario in a sale, some of the people noted.

Should Bausch Health ultimately choose to spin off Bausch + Lomb, it would seemingly resemble Novartis’ spinoff of the even larger provider of optical care, Alcon, completed in April 2019. Trading at a robust multiple on the public markets, Alcon’s market capitalization is $34 billion-plus.

The sale process comes as Bausch Health faces mounting pressure from shareholders to unload the unit. Bausch Health last week awarded Icahn Capital with two independent board seats after the billionaire activist recently disclosed a 7.8 percent stake in the company.

The newly appointed board members, Carl Icahn’s son Brett Icahn and Steven Miller, will be appointed to two board committees: finance and transactions and the committee assisting with evaluating strategic alternatives, including the potential spin of the company’s eye health business, the company said.

Glenview Capital Management, another Bausch Health activist investor, sent a letter to the company in February calling for the “equitizing and spin-off of Bausch Global Eyecare in an optimal fashion.” The 6 percent owner said that “communications regarding the timeline, capital structure and conditions necessary to move forward with the spin have been cryptic at best.”

Glenview among other things recommended Bausch Health raise capital by selling a stake in the eyecare subsidiary at fair value – whether that’s from a SPAC merger partner, private equity firm, leading North American or global investment institutions or the IPO market.