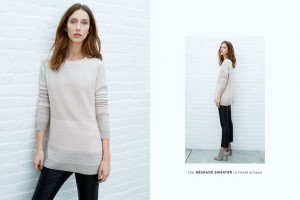 The IPO of Vince Holding will help Sun Capital Partners put its once-challenged investment in Kellwood Holding in the black.

In fact, Sun may even double its money in Kellwood, which currently owns Vince.

Boca Raton, Fla.-based Sun acquired Kellwood in 2008 for $955.4 million, including debt. Sun then created Apparel Holding to house all of the Kellwood brands.

Vince is Kellwood’s high-end sportswear brand and is expected to price its IPO later today and go public on Friday.  Vince is selling 10 million shares at $17 to $19 each, via book runners Goldman Sachs and Baird.

Sun Capital is holding onto the non-Vince businesses,  which include Rebecca Taylor and MyMichelle, according to press reports.

Apparel has not paid any dividends since 2008, according to an SEC filing. However, it will pay Vince’s pre-IPO stockholders about $172.2 million as part of a tax receivable agreement, the filing said.

The holding company has divested a number of divisions in recent years. These include Baby Phat, Phat Farm, Lamb & Flag, Black Denim, Gerber Childrenswear and Zobha. It received about $145 million in 2008 from the sale of Hanna Andersson and Gerber Childrenswear when they were sold to a Sun affiliate, a release from that time said

Apparel hit some rough patches, particularly during the financial crisis. Things got so bad that in 2009, peHUB reported that Sun had written down its investment in the holding company to zero. Apparel has “substantial indebtedness,” according to the SEC filing. Long-term debt stood at $386.8 million as of August 3.

Apparel expects to receive $159 million in net proceeds from the IPO and will use it to pay off some of that debt, the filing said.

Sun owns about 99% of Apparel before the IPO. It is selling a minute amount, 1.5 million shares, in the greenshoe. After the IPO, Sun’s stake in Vince will fall to roughly 24.71 million shares, or 68.1 percent. At $18 a share (the mid-point of its IPO range), Sun’s stake will be valued at about $444.8 million. It stands to receive another $27 million if the greenshoe is exercised.

Including paper gains, funds from the tax receivable agreement, sales and spinouts, Sun could make 1.5x to 2x its money, peHUB has learned.

The rebound in Sun’s Kellwood investment comes at a significant point in the firm’s fundraising. Sun is currently out marketing for its sixth pool, which has a $3 billion target. Sun began fundraising in December 2012 and hoped to wrap up marketing that month. The fundraising is taking longer than Sun expected and the buyout shop will be approaching $2 billion by the end of this year. Sun expects to finish up fundraising in 2014, peHUB has learned.